New Delhi, July 26 Amid the political crisis in Rajasthan, the Congress on Sunday sought to keep up the pressure on Governor Kalraj Mishra and accused him of acting in a partisan way and listening what it dubbed as voices of his masters at... 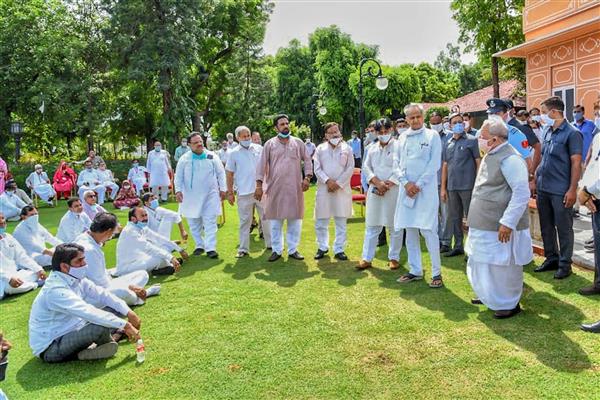 Amid the political crisis in Rajasthan, the Congress on Sunday sought to keep up the pressure on Governor Kalraj Mishra and accused him of acting in a partisan way and listening what it dubbed as voices of his masters at the Centre.

"The Governors are bound to function with the aid and advice of the state government (council of ministers) but he is listening to his masters' voice, that is from the government at the Centre," party spokesperson Abhishek Manu Singhvi said while addressing a press conference here.

The Governor is facing a flak from the Congress for not acceding to the state government's request to convene a special Assembly session to enable Chief Minister Ashok Gehlot prove his majority on the floor of the House in the wake of rebellion by Sachin Pilot and 18 other Congress MLAs over leadership issue.

The Governor maintained on Friday that no one was above the constitutional decorum.

Singhvi added: "Constitutional authorities -- be it the Governors, courts or central government -- are supposed to not only know their constitutional roles and boundaries but to scrupulously follow them in letter and spirit and promote the true intent of the framers of the Constitution." The Supreme Court lawyer said that court cases pending in the Rajasthan High court and the Supreme Court on the issue have nothing to do with the convening of the Assembly session in the state.

"Consider the following questions which arise in that regard, qua the conduct of high persons and institutions like the Governor or the central government.

"Is it commonsensically conceivable that any Governor ever should refuse or delay the holding of a floor test, which truly determines who has the numbers and objections/ queries, intended to delay and postpone the floor test, and not let the cat out of the bag as to who really has the numbers?" the Congress leader said.

"Is the Governor and his diverse advisers who have generated such queries not aware of established jurisprudence -- from the Constituent Assembly to diverse SC judgments -- that unequivocally establish that the Governor is powerless and without jurisdiction in matters where he is advised by the state Cabinet?" The Congress spokesperson cited many legal cases in support of his contention that the government has the power to call an Assembly session, apart from debates in the Constituent Assembly.

Singhvi quoted the Sarkaria commission report, saying that "the Governor should not risk determining the issue of majority support, on his own, outside the Assembly. The prudent course for him would be to cause the rival claims to be tested on the floor of the House." — IANS

Happiest moment of my life as I receive hello from PM Modi, says Kritika

Half of charitable beds found vacant in 4 Mumbai hospitals

Swaraag band comes up with song on coronavirus with Rajasthani...

5-year-old tiger dies within minutes of being tranquilised...

Shiv Kumar Tribune News Service Mumbai, May 2 The authorities of Maharashtra and...

Bihar: Less Than a Month After Inauguration, Bridge Collapses...

No injuries have taken place. The collapse has led opposition parties to question...

In a press release, the NSO however has said that it is not appropriate to compare...

Tennis Stars To Do Battle Online In Virtual Madrid Open

Novak Djokovic and Rafael Nadal could be set to face each other online after the...

New Delhi, May 10 The time had come for India to adopt a "whole-of-government approach"...

Grounds for ban on 59 apps ‘ambiguous’

The NDA now has nearly 100 members in the 245-member House. If the support of friendly...

World economy faces a $5 trillion hit, that is like losing...

By David GoodmanThe coronavirus pandemic is set to rob the global economy of more...