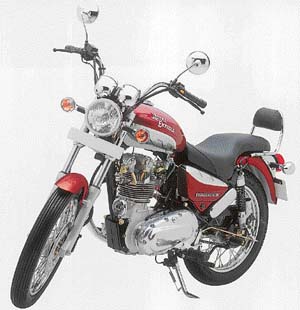 The company had sold 54,185 units in the same month last year, Royal Enfield said in a statement.

Royal Enfield said it is now leading the leisure motorcycle segment in the UK, with its Interceptor 650 becoming the highest selling motorcycle in the middleweight segment. - PTI

Burden of school bag to boon of learning, NEP reflects aspirations of 21st-century...

Amar Singh, a hedonist in a socialist party, passes away

Aviation sector’s financial woes to be more visible in...

What made TCS stock rally despite missing Q4 profit estimates

Every month, during their periods, women sanitation workers suffer from frequent...

PMO issues clarification over Modi's comments that no one...

The clarification states that the Prime Minister was clear that no transgression...

China planning to evacuate its citizens from India

Seven investors in 7 weeks. Everyone wants a slice of Jio